In genetic genealogy a match is considered to exist when a comparison of the DNA test results of two persons suggests there is a high probability of them sharing a common genetic ancestor within a relevant period of time. The testing companies each set their own criteria to determine what constitutes a match, and the criteria vary depending on the type of test taken (Y chromosome DNA test, mitochondrial DNA test or autosomal DNA test).

Family Tree DNA customers can adjust the settings for the e-mail notifications that they receive for matches at the various testing levels as shown in the following screenshot. 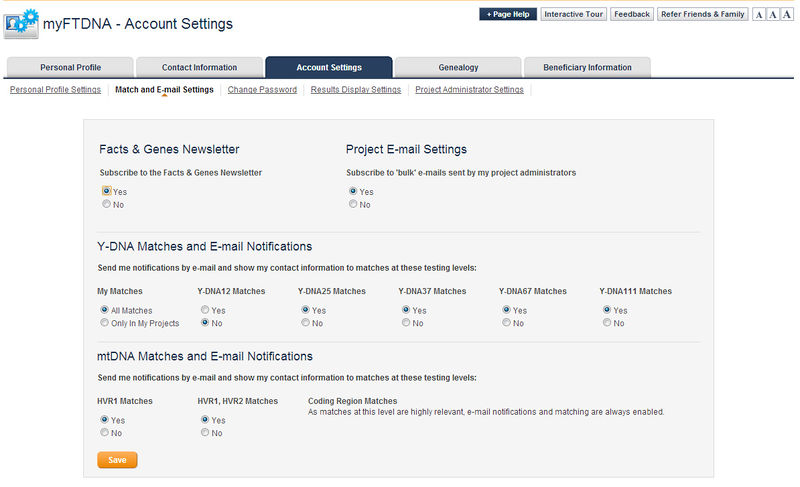 The minimum matching threshold at each testing level is as follows:

ISOGG surname project administrators have reported the minimum and maximum number of matches of individuals with other individuals in FTDNA's entire database as of October 2013 as follows:

The number of matches an individual may have depends on two factors:

2. The populations in the FTDNA database. The FTDNA database predominantly consists of testees of European origin, with Americans forming the largest grouping. Testees from under-represented populations (eg, Asians and Africans) are more likely to have fewer matches.

3. The rarity of the individual's haplotype. Some testees with particularly rare haplotypes will have no matches at all at any resolution level. It is estimated that less than 5% of those who have tested at FTDNA are in this situation. At the other extreme people can sometimes have thousands of matches. This usually happens when a person matches the the Irish Modal Haplotype (the signature which generates a "Niall of the Nine Hostages" badge) or the Western Atlantic Modal Haplotype.[3][4] Most people will have a much more manageable number of matches.

Ralph Taylor has written a detailed article Measuring haplotype rarity in which he attempts to quantify the commonness and rarity of Y-STR haplotypes.

Each company sets their own autosomal DNA match thresholds. These criteria must be met before the company will report that two individuals very likely inherited their half-identical matching segments from a recent common ancestor.