With the established patrilineal transmission of Y-DNA with surnames in Ireland, researchers for some time sought to find sets of short tandem repeat (STR) marker values that might identify the great ancient families of Ireland. The distinctive STR signature of one Haplogroup R1b cluster was identified (Wilson, D 2004, and separately and formally Moore et al 2006) as the Irish Modal Haplotype (IMH). Wilson also showed the connection of IMH with the, kings of medieval Ireland, and specifically descendants of the semi-legendary 5th Century king, Niall of the Nine Hostages. It was later found that this cluster is derived for the single nucleotide polymorphism (SNP) M222 (McEwan, 2006).

The definitive markers identified for this cluster are:-

Y-search ID M5UKQ has been set up for the NW Irish cluster modal values.

The R-M222 branch of the Y-DNA tree is defined by a single nucleotide polymorphism (SNP) called M222. This diagnostic marker is associated with many individuals whose roots lie in the counties of Northwest Ireland, Ulster and Lowland Scotland. The shaded footprint in the map below shows the area where this profile is most often found. In no county is this pattern the dominant DNA profile, but in some counties (Donegal in NW Ireland, for example) it approaches 20 percent. 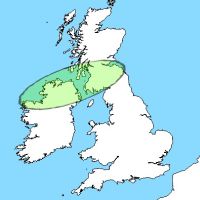 The cluster was shown to be M222+ when this single-nucleotide polymorphism (SNP) was discovered in 2006.

SNP M222 is recognised by ISOGG on their yDNA Haplogroup R Tree.

A project has been established at FTDNA for those testing M222+.