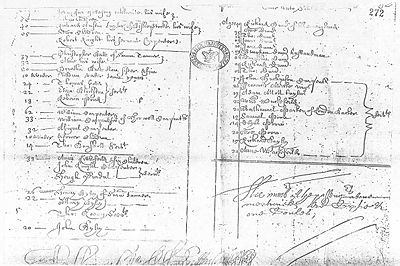 The Rehoboth Carpenter family is an American family that helped settle the town of Rehoboth, Massachusetts in 1644.[1] The genetic research on this family is notable.

The first immigrant and founder of this line was William Carpenter (generation 1) (b. c1575 in England), his namesake son, William Carpenter (Generation 2) (c1605 in England -1658/9 Rehoboth, Bristol, MA), and the son's wife and children (then numbering four) arrived on the Bevis from Southampton, England, in 1638. Nothing more is known of the father, William, in Massachusetts and he is presumed to have perished either in passage, shortly after arriving in the new world or, less likely he returned to England. William Carpenter (Gen. 2) is buried in the Newman Congregational Church Cemetery with a simple field stone marked with a "W. C.".[1]

William Carpenter, (Gen. 2) first appears in New England records in 1640, as a resident of Weymouth, Massachusetts. He was among the founders (at Weymouth in late 1643) of the Plymouth Colony town of Rehoboth (settled 1644). His son, William (Gen. 3) Carpenter (b. 1631 in England - 1702/3 Rehoboth, Bristol, MA), was for many years Rehoboth town clerk, by virtue of which his name—not that of his father—appears with some frequency in Plymouth Colony records, in association with a number of local vital-records lists that he certified and forwarded to colony authorities. The name William Carpenter appears in copious Plymouth Colony records and in the writings of John Winthrop and in other public records over the generations.[2] 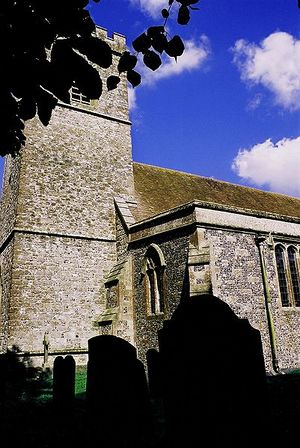 St. Michael and All Angels, Shalbourne

These Carpenters previously lived in Shalbourne, an English parish near Hungerford that straddled the boundary between Wiltshire and Berkshire. The Rehoboth Carpenters' English origins were obscure until the discovery of Bishops' Transcripts of Shalbourne parish records containing marriage, baptismal, and burial records pertaining to them. Among these records is that of William (Senior) Carpenter's marriage in 1625 to Abigail Briant of Shalbourne. A search of Westcourt Manor tenants' records reveals William Carpenter (Gen. 1) as a copyholder at Westcourt Manor in Shalbourne from 1608 to late 1637.[1]

William Carpenter (Gen. 1) born about 1575 in England. He died after 2 May 1638 (Bevis passenger list) and certainly before 1644 when his son, William settled in Rehoboth. He was of Newtown, Shalbourne Parish, Wiltshire, England, by 1608, when he became a copyholder (semipermanent leaseholder) at Westcourt Manor (Westcourt Recs 7). Shalbourne, completely in Wiltshire since 1895, previously it straddled the line separating Wiltshire and Berkshire, with Westcourt comprising the Wiltshire part of the parish (Shalbourne Map); the Hampshire border was/is about four miles away. It is likely that William was born in one of these three counties. William's renewal of his Westcourt tenancy on 22 June 1614 gives his age as 40 (Westcourt Recs 7). The passenger list of the Bevis, the ship on which he left England, is dated 2 May 1638 and states William's age as 62 leading to an estimate of about 1575 for his birth.[3] 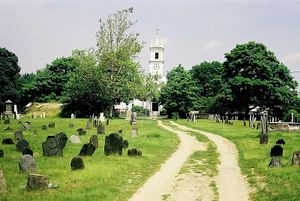 This much we know: William (Gen. 2) Carpenter's admission as a Massachusetts Bay Colony freeman from Weymouth in 1640 required church membership. The minister at Weymouth was Rev. Samuel Newman, most of whose congregation accompanied him to Rehoboth, where he was also the minister. William (Gen. 2) Carpenter was one of Rehoboth's fifty-eight original proprietors and is buried in Old Rehoboth (Newman Church) Cemetery. (While records of the time provide no direct evidence as to the religious affiliation of William (Gen. 2) Carpenter of Rehoboth, he was certainly not a Baptist, even though other Carpenters in New England were. In this regard, he is sometimes confused with William Carpenter (Rhode Island) of Providence and others.[7][8]

Through his five sons, Capt. William Carpenter became known as the father of "The Family of Heroes." Over 300 of his male lineal descendants served America in the Revolutionary War. No other American family can make such a claim. [9]

William Carpenter of Providence, son of Richard Carpenter of Amesbury was a reportedly a first cousin of William Carpenter of Rehoboth, son of William Carpenter of Shalbourne, England. In addition he supposedly was closely related to Alexander Carpenter of Wrington, Somersetshire, and Leiden, Netherlands, of whom his four married daughters were in the Plymouth Colony in the early 1620s. This derives from Amos B. Carpenter’s[1] unsupported claim that Richard of William of Shalbourne, and Alexander Carpenter were brothers. No genealogical evidence has been found even hinting at a link between the Wrington Carpenters, on the one hand, and either of the other two afore-mentioned families, on the other; a connection is highly improbable. Traditional genealogical research methods provide good reasons to doubt also that Providence William and Rehoboth William were closely related.[13]

Results of recent genetic (Y-DNA) testing coordinated by the Carpenter Cousins Y-DNA Project support this conclusion: Based on a number of 67-marker tests, “we can state with 95% confidence that the most recent common ancestor of the two groups [descendants of the Providence and Rehoboth Carpenters, respectively] was more than 2 generations before the immigrants and less than about 20. Therefore, the DNA testing has very nearly ruled out the often-repeated claim that the Williams were first cousins. The most likely estimate is about 7 generations, but that is a very rough estimate, and the 95% confidence interval is a more reasonable description of what the DNA is telling us” (Carpenter Cousins).[14]

The Carpenter Cousins Y-DNA Project[15] has conducted Genealogical DNA testing on twenty males with genealogical paper trails as of 2010. Nine males who have incomplete genealogical data but match genetically were placed in subgroup of Group 3.[16] These twenty nine males are genealogically and genetically descendants of the immigrant William Carpenter (born about 1605) who settled in Rehoboth, Bristol, Massachusetts from England. By a process of genetic triangulation, their common ancestor's Y-DNA DYS markers were re-constructed. See table below.

The haplotype Y-DNA testing representative samples of member of Group 3 based on Single-nucleotide polymorphism or SNP testing reveals Haplogroup R1a1a1b1a. See also the 2015 ISOGG tree for the shorthand code of R-Z282.

Notes: Differences between Group 2 & Group 3 are: