(Redirected from SNP)
This page contains changes which are not marked for translation.
Other languages:
English

A single-nucleotide polymorphism (SNP, pronounced snip) is a DNA sequence variation occurring when a single nucleotide adenine (A), thymine (T), cytosine (C), or guanine (G]) in the genome (or other shared sequence) differs between members of a species or paired chromosomes in an individual. For example, two sequenced DNA fragments from different individuals, AAGCCTA to AAGCTTA, contain a difference in a single nucleotide. In this case we say that there are two alleles: C and T. Almost all common SNPs have only two alleles. 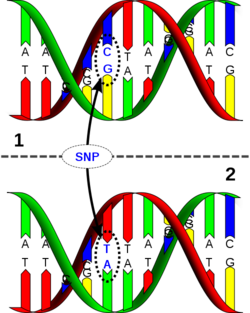 Within a population, SNPs can be assigned a minor allele frequency — the lowest allele frequency at a locus that is observed in a particular population. This is simply the lesser of the two allele frequencies for single-nucleotide polymorphisms. There are variations between human populations, so a SNP allele that is common in one geographical or ethnic group may be much rarer in another.

Single nucleotides may be changed (substitution), removed (deletions) or added (insertion) to a polynucleotide sequence. Single nucleotide polymorphisms may fall within coding sequences of genes, non-coding regions of genes, or in the intergenic regions between genes. SNPs within a coding sequence will not necessarily change the amino acid sequence of the protein that is produced, due to degeneracy of the genetic code.

A SNP in which both forms lead to the same polypeptide sequence is termed synonymous (sometimes called a silent mutation) — if a different polypeptide sequence is produced they are nonsynonymous. A nonsynonymous change may either be missense or nonsense, where a missense change results in a different amino acid, while a nonsense change results in a premature stop codon. SNPs that are not in protein-coding regions may still have consequences for gene splicing, transcription factor binding, or the sequence of non-coding ribonucleic acid (RNA).

A confirmed SNP Z282 (in green equals positive + or confirmed by SNP testing) chart from FTDNA. This screenshot shows the various colors used for designating SNPs.

SNPs, in particular the key marker SNP used in Hapologroups, are designated by color or code in genetic genealogy.

A non-tested or estimated SNP is usually designated in a black or the standard color of the text or without a symbol of tested confirmation ( + ) or non-confirmation ( - ) code.

A tested SNP that is confirmed by SNP testing is usually designated in a green colored text or with a plus symbol ( + ) after the SNP designation. It is often referred to as derived or given a positive ( + ) code.

A tested SNP that is not confirmed or that is negative ( - ) is usually in red text.

SNPs pending testing, or assumed negative have different colors, but do not use the code of either positive ( +) or negative ( - ). Different colors can be used by various testing companies, so it is important to confirm the designations within the charts given.

For an example of Haplogroup R1a1a1b1a with SNP marker of Z282 and using the shorthand code of R-Z282 uses designated colors representing the SNP status. See the image.

Use and importance of SNPs

Variations in the DNA sequences of humans can affect how humans develop diseases and respond to pathogens, chemicals, medication, vaccines, and other agents. SNPs are also thought to be key enablers in realizing the concept of personalized medicine. However, their greatest importance in biomedical research is for comparing regions of the genome between cohorts (such as matched cohorts with and without a disease).