Triangulation is a term derived from surveying to describe a method of determining the Y-STR or mitochondrial DNA ancestral haplotype using two or more known data points. It is also used in autosomal DNA testing to determine the common ancestor by triangulating from known relationships. The term "genetic triangulation" was coined by genetic genealogist Bill Hurst in 2004.[1]

Triangulation has been around a long time. It has been used in maps, navigation and within different sciences. For more information, please see: Triangulation types at Wikipedia.

The basics of triangulation for Y-DNA testing 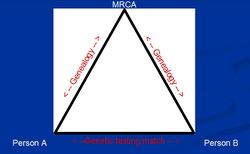 The basics of Genetic Genealogy Triangulation.

If the genetics of Person A & Person B match and the paper trail goes to the MRCA, then this helps prove they are related both genealogically and genetically. This is the goal of genetic genealogy. The genetics help confirm the paper trails (genealogy) back to the MRCA. When this is repeated several times back to a common ancestor, we then can recreate the DNA markers or genetic fingerprint of that ancestor. All without digging them up!

If there is a break in any point of the triangle, it should be noted appropriately.

In defining Y-DNA triangulation for the Genetic Genealogy DNA Testing Dictionary in 2004, Charles Kerchner noted it as being "the process of determining the Y chromosome DNA Ancestral Haplotype of a male ancestor by looking at the allele values of the DYS markers in the haplotypes of the tested individuals in a surname project who descend from that ancestor by focusing specifically on the direct paternal line descendants of two or more known and different sons of the common male ancestor. Unless there is an exact match at all alleles at all DYS markers in the haplotypes of the two different direct male lines of descendants, at least three haplotypes are required to triangulate and deduce the ancestral allele for each marker."[2]

When comparing any DNA test using triangulations, one should always cite the common test. For example, When comparing say a 37 marker Y-DNA test with 111 marker Y-DNA test, you should always cite the lower value. Using the example given, a proper statement of genetic triangulation would indicate that Person A & Person B matched genetically and genealogically at 37 Y-DNA markers.

In autosomal DNA testing the term triangulation is most commonly used to describe the process of reviewing the pedigree charts of clusters of shared matches/in common with matches in order to identify a common ancestor or ancestral couple. This process is sometimes also known as tree triangulation.

There are a number of third-party tools which can be used to aid the process of segment triangulation such as those available from GedMatch and DNAGEDCOM (eg, Don Worth's Autosomal DNA Segment Analyser).