YFull.com was founded in 2013 and focuses on the interpretation of Y-chromosome sequences. The main aim of the project is to provide services for the analysis of full Y-chromosome raw data (BAM) files and convenient visualization. The data is collected and analysed and newly discovered single-nucleotide polymorphisms (SNPs) are placed on an experimental Y-tree. Haplogroup and thematic projects are offered.

Analysis of Y-DNA NextGenSequences raw data (BAM or FASTQ file). Technical requirements raw files: Alignment BAM file, Coverage for full reports is min 25X, Read length min 100 bp. WGS 4x, 10x, etc. is also accepted. [1]. After several weeks of raw data analysis the SNP results are ready and up to notification the payment of $49 is requested either with PayPal or through Credit Card (over Assist accepting Visa, Mastercard, etc.). A month after the payment request unpaid results/samples will be hidden, STRs will not be processed (usually take over a month from payment date) and basic access ("Check SNPs", "Browse raw data" etc.) is withdrawn. Payment will unhide the results. 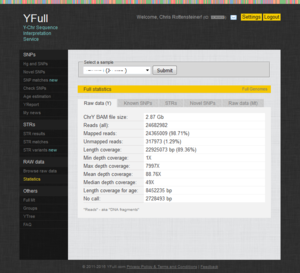