Katie and Julie's journey thru the X

This is a chronicle of two friends; Katie, an American, and Julie, an Australian, as they explore and learn what their X-chromosomes can tell them about their ancestry.

Julie: Is anyone able to help me understand the match showing on the attachment please? 23andMe predicts this lady and myself to be 4th cousins...so assuming a good possibility that we share a set of 3rd great-grandparents. Unfortunately, I hit my direct maternal line brick wall with my 2nd great-grandmother in Ireland. % DNA shared is 0.57% and we half-match on two segments, with one of those being the large blue bit on the X. 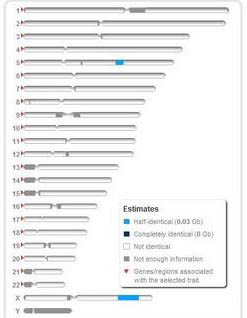 Katie: Four "You have a Relative Finder Introduction" e-mails hit my e-mail inbox consecutively beginning at 8:35 pm. I click to approve the most recent one and notice that 23andMe has changed the sharing request message to include genome sharing. The request is from someone I know - Pat! I check the appropriate box and hit submit and Pat's father's name appears at the top of my RF list. (The reason that there were four e-mails at once is because he matches my mother, my brother, my son and myself. Pat's dad most closely matches my mother; one segment is pretty large as a matter of fact. Relative Finder predicts them to be 3rd cousins with two matching segments at 1.22%. The large dark blue segments on the chart is Pat's father's match to my mom, the green segment is to me, and the light blue segment is to my son. Pat and I exchange several e-mails but cannot pinpoint a common ancestor. We speculate that its either Scot, Irish, or Scots-Irish. 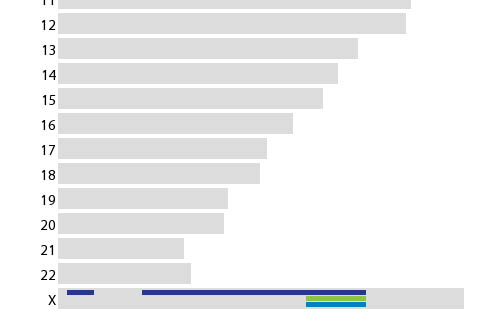 Katie: I mention the X match to Rebekah. I tell her that I want to figure out which ancestors contributed to the X but I can't make heads or tails of Blaine's chart. My brain wants to follow the pink maternal line at the bottom of the chart and skip over all the blue parts. Rebekah replies to not do that because Blaine has already taken out the ones that didn't contribute to the X; they are the white parts. Ohhhhhh! This helps!

Rebekah says that I need to write down the ancestors that correspond to the numbers on Blaine's chart. I had recently read a post by Randy Seaver regarding Ahnentafel numbering in Family Tree Maker so after reading about it in FTM's Help section, I clicked on "View"-> "Reports" -> "Genealogy Report". Then right click and click on "Genealogy Report Format". Check the radio button on "Ahnentafel (Ancestor Ordered) and then click "Ok". To ensure that all of our ancestors appeared on the report, I had to right click again, then click on "# of generations to show". I set it at "8". Because the chart begins with a male, I use my brother.

Katie: I contact Kathy and she instructs me to use Blaine's other chart (the one with the percentages) to figure out which ancestors contributed what.

Kathy says that sometimes the X is "scrambled" before its passed on. She later refers to the scrambling as "phasing" and I have another light bulb moment. So that's what "phasing" is - it is when people work to unscramble the parts of the X. I pass this info on to Julie.

Julie: I just found Blaine's female chart - thought I had seen it before - but it has no numbers on it. Drat!

Katie: Hi Julie, I can't figure out how to apply the Ahnentafel numbering system for females so I just put my mom's ancestors' initials on the chart. (See attachment). Now I'm stuck trying to figure out the percentages they contributed. It appears there may be a tie between the Scots and the Irish with a dash of Bohemian.

There are three Scot contributors: MD, TW, and MS; three Irish contributors: JEP, GP and JE, and two Bohemians: AE and whoever his wife was.

By looking at Blaine's percentage chart, I can see that JEP contributed 25% and GP and JE are at 12.5% each, but I can't see how this inheritance rule applies to the others. 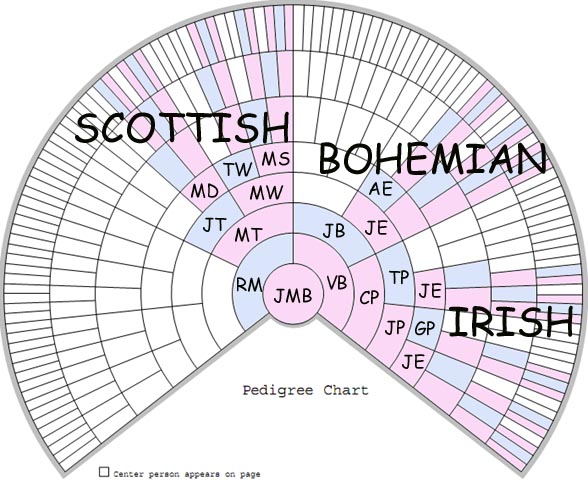 Julie: The Ahnentafel numbers are easy. I just hand wrote all 255 of them on a copy of his chart. Start with the centre (us) as 1. The next arc around L-R is 2 and 3 (our parents). The next arc is our grandparents 4, 5, 6 7. The next arc around starts at the left as #8 and this process just continues consecutively. This rough chart is my guide and I will now do a 'tidy' typed chart of only the relevant ancestor numbers. I feel I might as well add the percentages while I am at it. Then we might be able to figure each of our ancestor contributions a bit better...that's the theory anyway! Attached is Blaine's modified X-Chart. 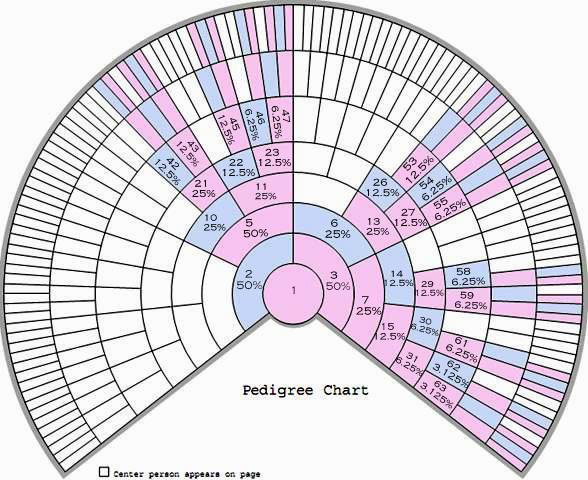 Julie: I am currently checking my brother on the male X chart...it's entirely different outcome for brother / sister pairs!

Julie: Sending brother/sister X charts and Blaine's male X modified. Just use or delete as you wish Pet. It's been an interesting exercise...now to see if I can make some sense of the biology! 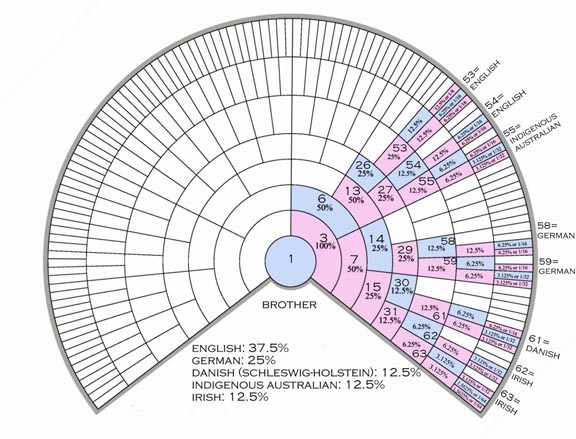 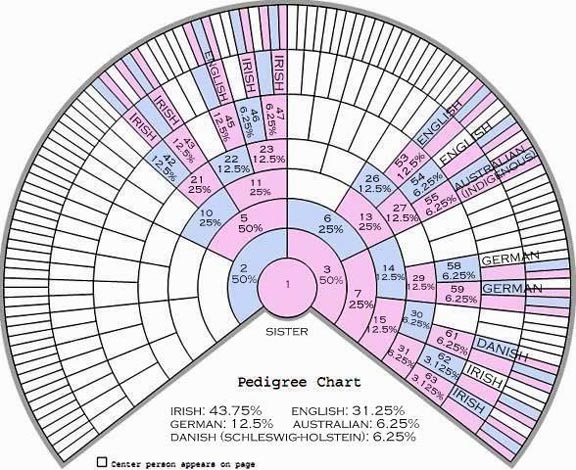 Katie: From looking at our charts, it appears that the father's ethnic contribution on the X will always be greater than the mother's because hers is mixed. What's really cool is the way we can figure out which ancestors contributed to the X and which didn't!

Page originally compiled on: Dec 2009
A compilation of ISOGG message postings, e-mails, and a few phone calls between Julie Falk and Katherine Borges. Thanks for making this page possible goes to Kathy Johnston, Blaine Bettinger, Rebekah Canada, Pat Tagert, 23andMe and of course, to our family and ancestors!
Retrieved from "https://isogg.org/w/index.php?title=Katie_and_Julie%27s_journey_thru_the_X&oldid=20751"
Categories: