A Y-STR is a short tandem repeat (STR) on the Y chromosome. Y-STRs are usually designated by DYS numbers. The standard Y-chromosome (Y-DNA) test used for genealogical purposes looks at differing numbers of Y-STRs, collloquially known as markers. The combination of Y-STRs tested is known as a haplotype. 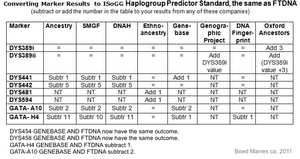 DNA testing companies or labs in certain cases use different nomenclatures to designate the same Y-STR allele. Thus, a conversion must be applied in these cases to accurately compare Y-STR results obtained from different companies. The most common nomenclature is based on guidance provided by NIST for Y-STR markers historically reported differently by various companies. The NIST standard is the proposal of ISOGG for genetic genealogy companies. [1][2]