The Carpenter Cousins Y-DNA Project is open to all males with the surname of Carpenter and Zimmerman with all their name variations.

The main link to the Project web page contains an introduction to the project, an update section, discussion and DYS marker values based on genetic groups in 3 tables.

The comparison lineage page, is based on genetic grouping, provides a drop down type chart showing ancestry to the common group ancestor.

The FTDNA public "X" page is used to show only the most recent FTDNA results. It is a slow loader and does not include the 25 plus members from other DNA testing companies.

Carpenter is a surname. Its use as a forename or middle name is rare. Within the United States, it is ranked as the 189th-most common surname.[1] The English meaning of carpenter is one who makes wooden objects and structures by shaping wood.[2]

Common use of the Carpenter surname in the English language is seen circa 1275-1325 in Middle English. Its use prior to this time as a surname has roots in the Anglo-Norman French introduced into England about the time of the Norman conquest of England of 1066. The earliest attested use as a surname in English is from 1121,[3] though its use as a secondary name or description in the Domesday Book of 1086 might have precedence.

In Old French, the surname was commonly written as "Carpentier" and its earlier form as "Charpentier". Its use as a surname may have derived as a nickname or description of one's occupation circa 900-1000.[2]

All of these variations come from the Late Latin carpentārĭus, denoting use as an artifex[4] - a wagon or carriage-maker equal to a wainwright. The roots of carpentārĭus come from the Latin carpentum, meaning a two-wheeled carriage or a form of chariot not used directly for warfare in the community by women and others, plus arius - used in the masculine form as a noun denoting an agent of use from other nouns. It may be related to the Old Irish carpat and the Gaulish language carbad for carriage or cart, and is probably related to the Gaulish karros.[2]

The following related names are not in the Y-DNA study, unless a descendant uses the surname Carpenter or one of its common variants.

A Y-DNA surname project exists for both Carpenter and its related variants, and the related names in German (Zimmerman), French (Charpentier), and other languages with their name variants within a single project.[12]

Y-DNA is passed from father to son virtually unchanged over the generations. DNA has documented that Carpenter, Zimmerman, Charpentier and other related surnames do not have a single common root. While grouping does exist, it seems by parent or native country rather than regional via the most common ancestor.[12]

As of August 2009, the Y-DNA project is active with 20 organized groups with number 20 representing genetic near matches (Group 98) and random results (Group 99). There appears to be about 240 tested members with the majority (215) from Family Tree DNA and the others from different DNA testing companies for genetic genealogical testing. Sub-grouping within the group is done in two ways. 1) By genealogical paper trails or the lack there of resulting in connections genealogically and genetically related then genetically related but not connected genealogically. 2) By Y-DNA markers representing genetic mutations or a genetic distance or variance from the group norm. These mutations within the group can form genetic sub-grouping if confirmed by genealogical material. The possibility of a random mutation occurring in different lines must always be considered in DNA testing and is called a random match. Project administrators have paid special attention to these mutations for group association. Two groups in particular (Groups 2 and 3) have 24 out of 25 markers in common. Further testing, including specialized testing on individual DYS markers, have provided a clearer separation of based on DNA values.[12]

Haplogrouping is consistent within the organized groups 1-19, but is not focused on by this genetic-genealogy project. Haplogroups and their haplotypes help reveal deep ancestry based on mathematical probability and tries to relate to prehistoric or estimated cultures]], groups or climes. The common western European Haplogroup, R1b, also known as the Western Atlantic Modal Haplogroup (WAMH), shows up in the majority of the groups which is not unexpected with the majority of tested members claiming Europe as a possible location for their ancestors. Those who have this more common haplogroup should test 37 or more markers while most others can start at a 25 markers Y-DNA test.[12]

All groups have made an effort to provide a basic paternal lineage that is listed on a separate page and can be accessed via ID numbers on Table 1 or via the Table of Contents “Lineages” hyperlink. Only one paternal lineage claims descent more than 600 years. This is consistent with common genealogy trends and results. While Y-DNA testing will never replace proper genealogical efforts, it is valuable in confirming genetic relationships and non-relationships.[12]

While there are many Carpenter Coat of Arms, the oldest is noted as the "Hereford Arms."

Lord George Carpenter on account of faithful service rendered to the Crown was elevated, by patent dated 29 May 1719 as "Baron Carpenter of Killaghy" county Kilkenny, Ireland.[13]

Lord George Carpenter's Coat of arms appear to be of French or Norman heritage, "Paly of six, argent and gules, on a chevron azure, 3 cross crosslets or." Crest, on a wreath a globe in a frame all or. Supporters, two horses, party-perfess, embattled argent and gules. Motto: "Per Actua Belli" (Through the Asperities of War). These arms descend from John Carpenter, the younger (abt. 1372 – 1442) who was the noted Town Clerk of London during the reigns of King Henry V & Henry VI of England.[14]

These Arms are often referred to as the Hereford Arms, named for the later ancestral home of the Carpenter Family in Hereford, England. The Crest, supporters & motto apparently has changed several times over the centuries.[15] 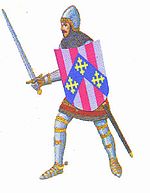 Sample of a medieval knight with an early Carpenter Coat of Arms on shield.

Sir William Boyd Carpenter (1841 – 1918), an English clergyman of the Established church of England, Bishop of Ripon, afterwards a Canon of Westminster and Chaplain to the reigning sovereign of England, wrote in a letter dated 7 August 1907 that his family bore the Hereford Arms. Sir Noel Paton, upon painting the Family Arms, informed him that the supporters were originally a round-handled sword, which in drawing over time became shortened, until nothing but the cross and globe were left beneath it. Those Hereford Arms were used by "John Carpenter, town clerk of London, who died 1442 A. D."[15] His grandson John Boyd-Carpenter, Baron Boyd-Carpenter (1908–1998), continued the Arms into the new century by passing it down to his son, Thomas Boyd-Carpenter, who was himself knighted after a military career as a Lieutenant-General and for public service.[15]

Please be aware that there is no direct male to male Carpenter descent connecting Lord George Carpenter & Sir William Boyd Carpenter. The family connection is by marriage through the females in the family.[16][17][18]

NOTE: The Hereford Coat of Arms described above should not be confused with the Arms of Bishop Richard Carpenter (c1450s?-1503) presented in the "Visitations of the County of Oxford taken in 1566, 1574, and 1634, published in 1871, which describe the arms displayed in the buildings at the University in Oxford - "In the Lyberarye of Baliall College." - as recorded by the officials performing the visitations in those years. The Visitations describe the arms of Richard Carpenter (theologian) as: "Paly of nine Gu. and Az. on a chevron Arg. surmounted by a mitre Or, three cross crosslets of—nine pales alternating red and blue, with a silver chevron bearing three gold cross-crosslets.[19]