In genetic genealogy, a cladogram is a diagram showing genetic relationships among a group of people. It depicts their commonalities and differences. "Phylogenetic tree" is a synonym for cladogram.

The chief value of cladograms is their graphic nature. A picture is often worth many words or numbers.

One example of a cladogram is the ISOGG phylogenetic tree of the human Y chromosome. Another is a descendancy chart printed by genealogical software.

Another example is the Fluxus Network diagram to the right -- a cladogram depicting six persons' 37 Y-STR marker haplotypes for a genetic family in one surname DNA project. It consists of six taxa (plus the software-added "modal" shown in magenta; three have an exact match at 37 markers. There are two branches; one is two mutations from the modal and one is a different mutation from the modal. 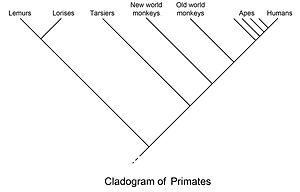 A cladogram of primates courtesy of Petter Bøckman, Wikimedia Commons

A cladogram applies cladistic techniques to genetic genealogy and pictorially displays the results. Cladistics "...is an approach to biological classification in which organisms are grouped together based on whether or not they have one or more shared unique characteristics that come from the group's last common ancestor and are not present in more distant ancestors. Therefore, members of the same group are thought to share a common history and are considered to be more closely related".[1]

Cladograms for genetic genealogy differ from those used in taxonomy in focusing only on humans and concerning smaller variations (e.g., specific STR or SNP mutations). Also, data for the root (ancestor) is typically not available and must be hypothesized.

In surname Y-DNA projects, cladograms can give an indication of which branches are likely to be more closely related to each other (and thus share a common ancestor more recently than other branches). This helps focus further traditional genealogical research in that it helps identify those branches which perhaps should be working more closely together to find documentary evidence of their (more recent) connection.

The basic unit of a cladogram is a taxon (plural taxa), an individual, group or species (in short, anything the cladisticist chooses). In Y-DNA cladograms, a taxon may be an individual's haplotype or pattern of STR markers and their allele values. The taxa in a cladogram are usually inferred to be phylogenetically related. It is recommended that the cladisticist assure phylogenetic relationships before constructing a cladogram.

A frequent cladogram convention is to imply "advancement" by direction. Upward and/or rightward may signify greater complexity; downward and/or leftward, less complexity. This may not apply in genetic genealogy; a mutated haplotype is not necessarily either "better" or "worse" than the prior form.

Cladograms often rely on a parsimony criterion (e.g., Occam's razor) to infer phylogeny from molecular data. That is, the explanation requiring the fewest assumptions is most likely to be true.

Cladograms may have a wide range of complexity, depending on the number of taxa and the closeness of relationships. For example, an exact Y-DNA match between two or more people results in a single point (taxon). As differences increase, the points become separated.

Cladograms have uses in both analysis of genetic data and in illustrating the interpretation of the data. 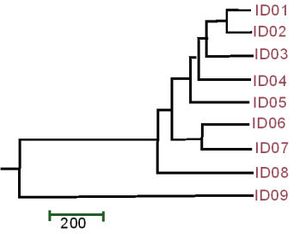 To the right is an example of Phylip output, in Newick tree format.

The (hypothesized) root is at the bottom left of the diagram.

Mutations are indicated by vertical lines; branches by horizontal lines.

Time scale is indicated below the tree. 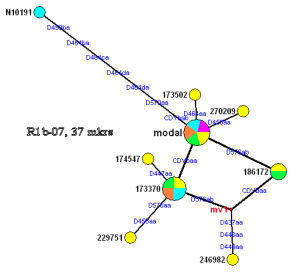 A more complex genetic family of 16 individuals; the "root" is at the node labeled "modal". Multiple exact matches in three nodes are represented by various-colored pie slices; by inference, these persons are more closely related to each other than to others in the group. Higher resolution (e.g., 67 markers) may show differences to separate the taxa into different nodes. The blue circle in the upper left corner represents a man whose MRCA with the others must predate the mid-1600s; here, genetic data and paper trails are consistent. 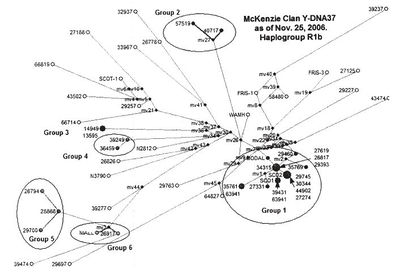 It was initially produced by Fluxus Network and subsequently modified. Note the circling of "Group 1", "Group 2", etc.

It is possible to draw cladograms without the use of special software. (See the Robb article cited under "Further Reading".) Or, one may use drawing software. This approach may be necessary if one wants to combine genetic with genealogical data.

Cladograms are not all-purpose tools; a cladogram may not show show what one expects.

The steps in constructing a cladogram are:

Thanks to ISOGG member Ralph Taylor for providing the text for this page.