A cousin is a relative with whom a person shares one or more common ancestors. In the general sense, cousins are two or more generations away from any common ancestor, thus distinguishing a cousin from an ancestor, descendant, sibling, aunt, uncle, niece, or nephew. Systems of "degrees" and "removals" are used in the English-speaking world to describe the exact relationship between two cousins (in the broad sense) and the ancestor they have in common. Various governmental entities have established systems for legal use that can more precisely specify kinships with common ancestors existing any number of generations in the past, though common usage often eliminates the degrees and removals and refers to people with common ancestry as simply "distant cousins" or "relatives".

The ordinals in the terms "first cousins", "second cousins", "third cousins", refer to the number of generations to one's closest common ancestor.[1] The number of "G" words used to describe this ancestor will determine how close the relationship is. For example, having "Great-Great-Grandparents" in common would be third cousins. When the cousins are not the same generation, they are described as "removed". In this case, the smaller number of generations to the common ancestor is used to determine the degree, and the difference in generations determines the number of times removed. Note that the ages of the cousins are irrelevant to the definition of the cousin relationship.

Non-genealogical usage often eliminates the degrees and removes, and refers to people with common ancestors merely as cousins or distant cousins.

A cousin chart, or table of consanguinity, is helpful in identifying the degree of cousin relationship between two individuals using their most recent common ancestor as the reference point.

Instructions for using this chart: 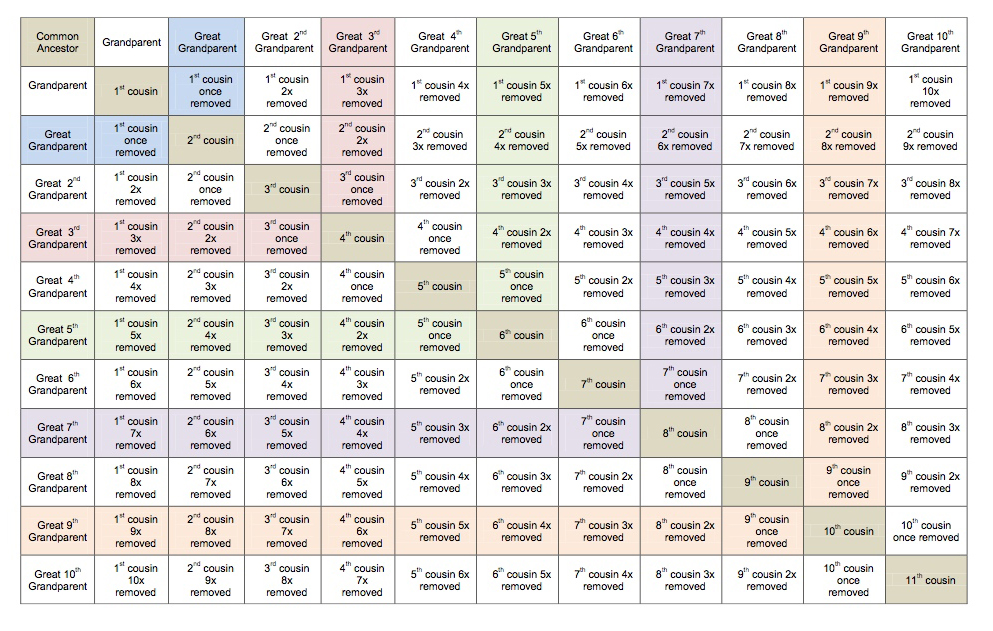 There is a mathematical way to identify the degree of cousinship shared by two individuals. In the description of each individual's relationship to the most recent common ancestor, each "great" or "grand" has a numerical value of 1. The following examples demonstrate how this is applied.

Example 1: If person one's great-great-great-grandfather is person two's grandfather, then person one's "number" is 4 (great + great + great + grand = 4) and person two's "number" is 1 (grand = 1). The smaller of the two numbers is the degree of cousinship. The two people in this example are first cousins. The difference between the two people's "numbers" is the degree of removal. In this case, the two people are thrice (4 − 1 = 3) removed, making them first cousins three times removed.

This article is licensed under the GNU Free Documentation License. It uses material from the Wikipedia article "Cousin".