It is helpful to have an understanding of the probabilities of matching cousins at different degrees of relationship when contemplating autosomal DNA testing or when interpreting the results of an existing test. This article reports some relevant cousin statistics.

The following table shows the information provided by the three main testing companies on the probability that two cousins will share enough DNA for the relationship to be detected. AncestryDNA claim to be able to detect more relatives in the third to sixth cousin range which possibly relates to their use of phasing. Note that each company sets its own autosomal DNA match thresholds and some more distant matches might not appear because of these restrictions.

Amy Williams and colleagues at Cornell University have provided two useful chart based on simulations which shows the likelihood of matching with cousins of different degrees of relationship and the number of segments shared:

Simulations in a 1983 paper by Kevin Donnelly showed the theoretical probability of having no detectable DNA inherited from a specific ancestor and the probability of sharing DNA with cousins of varying degrees of relationship. The content of the following two tables is derived from Table 1 in the paper The probability that related individuals share some section of genome identical by descent by Kevin P Donnelly, Statistical Laboratory, Cambridge University, Cambridge, England. (Source: Theoretical Population Biology 1983: 23, 34-63) A copy of the paper is available here. 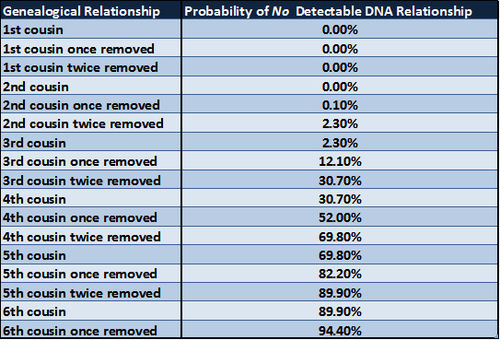 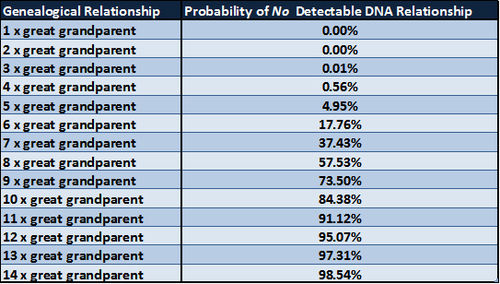 In their research presented in the February 2016 issue of Theoretical Population Biology[5], M. Sun, N.A. Sheehan, et al. conducted extensive simulations based on actual test results taken from modern microarray autosomal DNA tests and taking into account the effect of linkage disequilibrium. The authors examined the probability that any two people, via SNP testing, could be detected to have shared genetic ancestry versus the likelihood that they might be completely unrelated. For specificity, the models were run assuming there was a single MRCA, not a couple; i.e., that the ancestral lines descended from half-sibling children of the MRCA.

The authors organized the runs using four different densities of SNPs tested, with 500K being the closest value to our common microarray tests. In the table below the probability averages have been converted to percentages, and it is important to note that a value of 50% indicates at that level the ability to predict shared genetic ancestry as opposed to unrelatedness is indistinguishable per the simulation parameters:

One conclusion of the authors was, "as expected, identification of the true relationship from unrelated becomes more difficult as the relationship becomes more distant. We also confirmed...that it is much more challenging to distinguish between the true pedigree and a close alternative structure (rather than just 'unrelated') after about 6 separating meioses [2nd cousins] with 500K SNPs."[5] See also Table 3, Skare, Sheehan, and Egeland (2009)].[6]

How many cousins do we have? 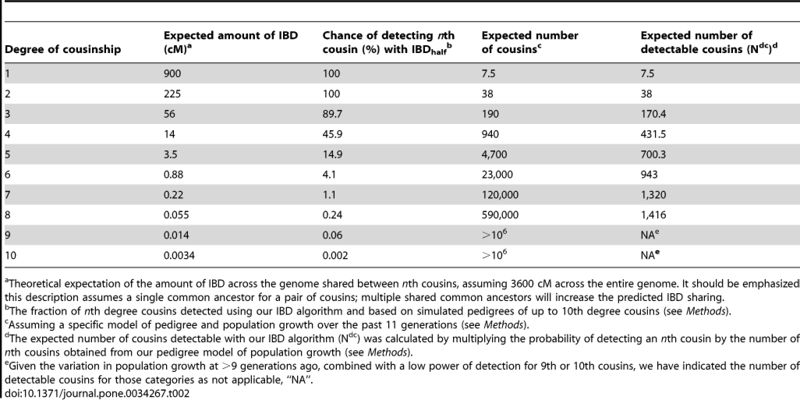 Mathematician and genetic genealogist Paul Rakow has done his own computer simulations on family sizes and has published the results in an essay on Counting cousins (published online 31 March 2016).

A study by AncestryDNA, based on British birth rates, census data, parliamentary research briefings[7] and other sources for the last 200 years, produced the following statistics on the number of cousins that the average British person would be expected to have.[8][9]

It is not clear if these statistics relate to the whole of the United Kingdom or just England and Wales.

Thanks to Jon Hamm for compiling the spreadsheets based on data from Donnelly (1983) that have been used in the section on theoretical probabilities.