DNA Relatives (formerly known as Relative Finder) is an opt-in feature of the personal genome service offered by 23andMe. It can be accessed from the "My Ancestry" Menu in the 23andMe user interface. It was beta-tested by members of the genetic genealogy community during the fourth quarter of 2009 and entered a public beta-test on November 9, 2009. It was released to the general public as Relative Finder in the first quarter of 2010.

DNA Relatives uses autosomal DNA to help find relatives from all parts of one's family tree. Until recently, DNA genealogy tests could only tell a person about a small part of their family tree, because they only used DNA from the Y chromosome and mitochondria. By using Autosomal DNA (abbreviated as atDNA), DNA Relatives can trace any ancestral line, no matter where it is in the family tree.

The science behind the feature involves comparing the atDNA of all participants to discover matching DNA segments equal to or greater than seven Centimorgans (abbreviated as cMs) on one segment, and if met, five cMs on the rest with 700 or more SNPs. The participant is then provided with an anonymous list of predicted relatives. The participant can send a message via 23andMe to his or her matches, but is restricted to sending five messages per day. It is therefore best to focus initially on the closest matches and the matches who have indicated that they have listed a large number of surnames on their profile page.

Steps to find your common ancestor for matches at 23andMe 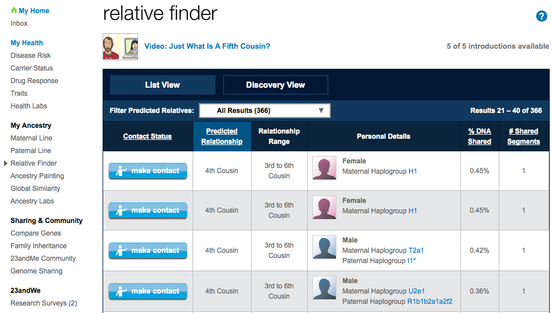 The next step is to decide who to contact from your list. A good place to start is by contacting those who have the closest relationship to you. From the DNA Relatives screen you can use the Make Contact button to send a message to your match(es) and request to share genomes at the Basic Level. Once your match agrees, next go to Family Inheritance: Advance under Ancestry Labs in the left hand column of your screen. Once on the screen, select the person in question to compare. 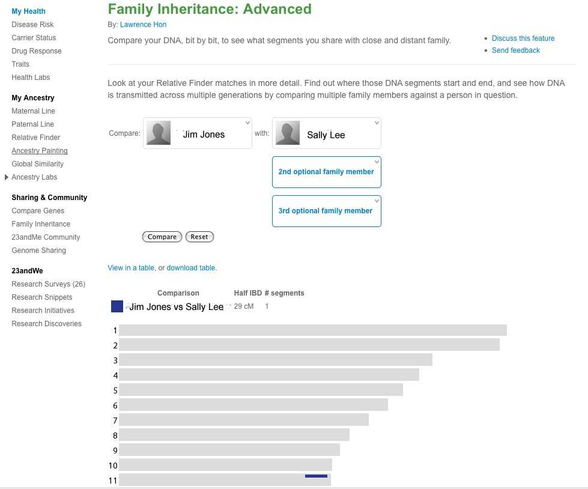 Select View in a Table and you will see the following information:

A generation can run an average of every 25–35 years. To understand generations and cousinship levels, check the following chart courtesy of Family Tree DNA FAQ.

Why would my parent match someone and I don’t?

There is a 50-50 chance of inheriting the chromosome that contains the match (as opposed to a smaller chance of a small segment being broken up into still smaller segments). In other words, if your mother's match came from her mother's side of the family, she must have given you the portion that came from her father's side instead. If you look at the Family Inheritance diagrams at 23andMe for the demo Mendel family, you can see that the three grandchildren have matching segments with their maternal grandmother OR their maternal grandfather, never both. Take Ian Mendel, for example, and switch back and forth between comparisons with his maternal grandparents, Ron and Margo Fisher. It's like looking at a photo and its negative.

Why do three people from different generations all have the same-sized segment?

One person had this situation: "On Chromosome 10: I match exactly, the father, his daughter and his granddaughter: Same segment, same cM, same number SNPs (0.10%). DNA Relatives lists all three as 4th to 10th cousins. I had expected to see a (declining size/SNP count), from the father to granddaughter."

Yes, that's an illustration of the 50-50 random chance. When you get down to a small segment, the probability is actually higher that you will inherit all of it (in this case) or none of it (as in the first case listed above), vs a recombination event that happens to occur right smack dab in the middle of it and chops it into even smaller pieces. The shorter chromosomes typically have just one cross-over point, while the longer ones may have two cross-over points. (From a message from Ann Turner on the ISOGG mailing list.)

On August 14, 2010, 23andMe added the ability to download a csv file of all DNA Relatives matches. This option is located in the top right corner of the list of Relative Finder matches.

On July 22, 2010, 23andMe added the ability for each customer to choose to make his/her profile a DNA Relatives "Public Match". These public profiles will automatically be shown on DNA Relatives and Ancestry Finder Lab when a match is found with another customer. This eliminates the need for an invitation to be sent to these public profiles and allows their matches to explore their profiles immediately.

To choose to be a "Public Match" follow these steps:

2. Go to the top right of the screen and select "Account"

3. From the drop down menu go to "Settings"

4. Go to the "Privacy/Consent" page

5. On the "Privacy/Consent" page, check the box that says "I want to make my profile publicly visible in DNA Relatives and the Ancestry Finder Lab."

Initially, the information provided by 23andMe referred to matching DNA segments equal to or greater than seven cM on one segment, and if met, five cMs on the additional segments, all with 700 or more SNPs. Later they happened to mention that the above applied to autosomes, but X chromosome thresholds are quite different, and gender-specific. Still later, error thresholds were mentioned. For DNA Relatives (but not for Ancestry Finder) at least one segment must equal or exceed 7 cM.

autosomal and X: 500 SNPs, 5 cM.
The criteria roughly correspond to allowing an error rate of 1%.