Autosomal DNA statistics describe the connection between the genealogical relationship between two people and the amount of autosomal DNA which they share. Understanding this connection is critical to interpreting the results of an autosomal DNA test.[1]

When interpreting autosomal DNA statistics, one must be careful to distinguish between the distribution of shared DNA for given relationships and the distribution of relationships for given amounts of shared DNA. For example, known second cousins on average share 212.5 centiMorgans (cMs), but in extreme cases can actually share as little as 47 cMs or as much as 760 cMs. Conversely, the relationship between pairs of individuals sharing 212.5 cMs has been found to be anywhere between aunt-or-uncle/niece-or-nephew and third cousin once removed.

Distribution of shared DNA for given relationships

There are two simple mathematical methods of calculating the percentages of autosomal DNA shared by two individuals. Both methods give the same results except in the cases of parent/child comparisons, full siblings, double cousins, or any two individuals who are each related to the other through both parents.

The second method of calculating percentages (to which those relying on FTDNA or GEDmatch must resort) expresses the aggregate length of the half-identical (or better) regions as a percentage of the aggregate length of both sets of autosomes (paternal and maternal). The maximum value that the numerator in this percentage can take is the length of one set of autosomes (say the paternal); the denominator if the length of two sets of autosomes (maternal plus paternal). Thus, the percentages calculated by this method cannot exceed 50%, which is the value that it takes for a parent/child comparison (half-identical at all locations) or a comparison between identical twins (fully identical at all locations). Using Method II, full siblings (other than identical twins) will on average appear to have only 37.5% shared. Whenever there are fully identical regions, the calculated percentages will be smaller than for Method I as half-identical and fully identical regions cannot be distinguished from the available data and must be given equal weight in the calculation.

The first column in the table below shows the average percentages for different relationships and methods of calculation. The calculations assume that every child gets 50% from its mother and 50% from its father and in turn 25% from each of its four grandparents. The actual percentages vary from the average in individual cases. For example, a person might share 27% of his DNA with one nephew and only 23% with another. Because of the random way that autosomal DNA is inherited, third, fourth and more distant cousins will not necessarily have any detectable half-identical regions. According to Family Tree DNA's figures there is a 90% chance that third cousins will share enough DNA for the relationship to be detected, but there is only a 50% chance that you will share enough DNA with a fourth cousin for the relationship to be identified.

The degree of sharing is also displayed by the DNA companies in units of genetic distance known as centiMorgans (cMs), although in practice the total number of shared centiMorgans is less significant than the number and lengths of individual shared segments. The second column in the table below shows the aggregate lengths in cM of the half-identical (or better) regions shared on average by various pairs of relatives. It assumes that the aggregate length of each set of autosomal chromosomes is 3400cM, and thus that each individual inherits 6800cM of autosomal DNA, 3400cM from each parent. Different DNA companies use different autosomal DNA match thresholds, so that the actual cM figures provided by different companies may be slightly different from these round numbers, even before allowing for random variation around the averages in individual cases.

When using Family Finder data, the percentages based on Method II can be calculated from the cM lengths by dividing the displayed Shared cM by 68.

23andMe include the X-chromosome in their calculations, so their cM figures will be higher than those provided by FTDNA. 23andMe made adjustments to the cM count in June 2013 so the number of cMs will vary slightly depending on when the test was taken.

Note that AncestryDNA do not provide information on the lengths of half-identical (or better) regions in either centiMorgans or percentages on specific chromosomes. However, AncestryDNA customers can upload their raw data to the free GEDmatch utility in order to extract the necessary cM data for making comparisons and to check the relationship predictions. David Pike's tools can also be used.

The following table shows the average amount of DNA shared by pairs of relatives in percentages and centiMorgans. All relationships up to and including second cousins can be detected by autosomal DNA tests. However, some genuine genealogical third cousins will not show up as a match because, although both cousins will have inherited DNA from their common ancestors they do not share any overlapping DNA segments. Beyond about five or six generations we will have some genealogical ancestors with whom we share no DNA. They are our genealogical ancestors but not our genetic ancestors.[2][3] If we go back 450 years we have over 32,000 genealogical ancestors but we will have DNA from only around 1000 of these ancestors.[4] The averages shown here for relationships beyond the second cousin level reflect the fact that an increasing proportion of cousins will not share any DNA. The expected amount of DNA shared will therefore be much higher than the average. For the expected percentages of detectable relationships at different levels see the article on cousin statistics.

The chart below (courtesy Dimario, Wikimedia Commons) shows the average amount of autosomal DNA inherited by all close relations up to the third cousin level. 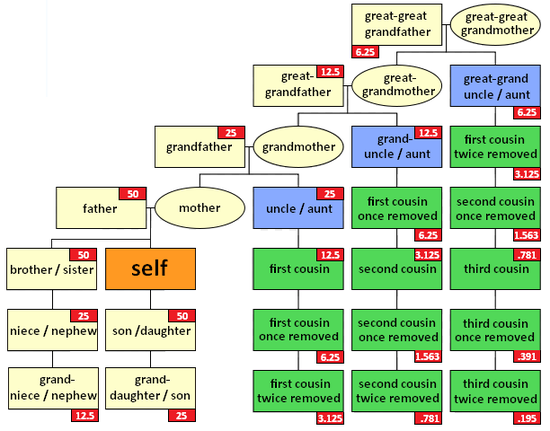 Distribution of genealogical relationships for given amounts of shared DNA

When interpreting DNA test results it is helpful to have an understanding of the statistics relating to the amount of DNA shared for known relationships. There is a limited amount of data available in the peer-reviewed scientific literature. This has been supplemented with citizen science projects, company data and computer simulations by geneticists and genetic genealogists.

A 2012 paper by Henn, Hon and Macpherson et al looked at IBD (identical by descent) sharing in the 23andMe database.[6] The paper included a figure (reproduced below) based on computer simulations showing the range of sharing for relationships up to the fifth to eighth cousin level. 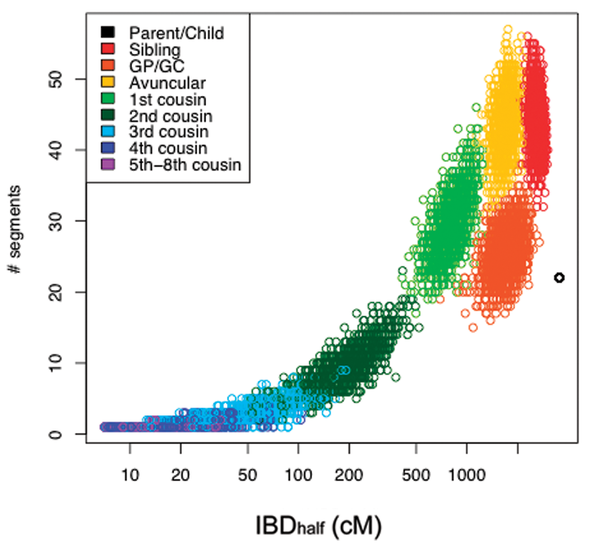 The relationship between the degree of cousinship and IBDhalf metrics. The authors used pedigree-based simulations to characterize the relationship between IBDhalf metrics and degrees of cousinship for multiple population samples. Genomic data from a European sample were used to simulate an 11-generation pedigree. The joint distribution of IBDhalf and number of IBDhalf segments is shown for each pairwise comparison from the pedigree simulations. GP/GC indicates grandparent/grandchild pairs. Simulations were run on phased samples from several HGDP-CEPH population samples and European, Asian and Ashkenazi samples from a 23andMe customer dataset. Simulations were conducted by specifying an extended pedigree structure and simulating genomes for the pedigree by mating individuals drawn from a pool of empirical genomes. Reproduced from Henn et al 2012[6] under a Creative Commons Licence.

A paper published by Hill and Weir (2012) looked at the variation in actual relationship as a consequence of Mendelian sampling and linkage.[7] Figure 5 in this paper shows the distribution of actual genome sharing for different degrees of pedigree relationships.

MyHeritage DNA have published a short table showing the range of sharing for close relations up to the first cousin level. See the article in their Help Centre What are shared DNA segments?.

Blaine Bettinger has been collecting empirical (real life) data from the genetic genealogy community on the number of shared centiMorgans for known genealogical relationships as part of his shared cM project.[11] The chart below is taken from the latest update of the project in March 2020 which was based on submissions for over 60,000 known relationships.[12] The chart is made available under a Creative Commons Licence. You are free to share and use the information for non-commercial purposes, as long as you give proper attribution and release anything you create under the same licence. Additional information including histograms and the breakdown of companies is provided in the PDF download. Data is still being collected for the project and you can add your own statistics using this form on GoogleDocs.

Jonny Perl has created a tool which incorporates data from the Shared cM project which allows the user to enter the total cM shared and get a report on the number of possible relationships. From an interactive chart you can click through and view the histograms from the Shared cM Project for each relationship. The tool can be found on the DNA Painter website. 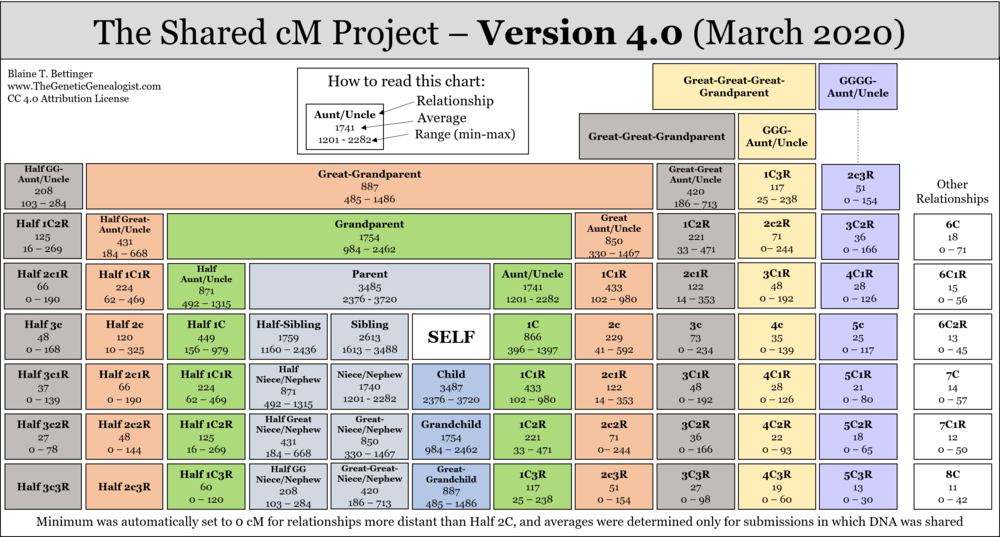 Lara Diamond set up an Ashkenazic Jewish Shared DNA Survey in January 2018 inspired by Blaine Bettinger's Shared cM Project. As of 1 September 2019 she had 5537 data points from the Ashkenazi community on the amount of DNA shared for different relationships. Further submissions are invited. She plans to issue follow on surveys for Sephardic and other Jewish subgroups.

Tim Janzen has provided two charts that provide statistical information about the amount of DNA sharing for various relationships from the first cousin once removed level and upwards for endogamous and non-endogamous populations. The statistics are based on information from real people who have been tested by 23andMe and Family Tree DNA and who have a known genealogical relationship to someone else who has also been tested by the same company. The charts were originally designed for use with 23andMe data but now also incorporate data from FTDNA's Family Finder test. The charts are organized by the degree of relationship with the most closely related people being listed at the top and more distant cousins being listed at the bottom. The charts also include information on the median and the average number of shared cMs for people who are related to each other from the first cousin once removed level of relationship to the 5th cousin level of relationship. The charts can be downloaded from the following links:

The following table provided by Tim Janzen shows the ranges of total centiMorgans shared and number of segments shared for different relationships based on data from the Mennonite DNA Project.[13] The cM totals are based on 6761 cMs in FTDNA's Family Finder test.

Tim Janzen has also compiled a chart showing the probability of a given genealogical relationship for each cM threshold going up in 1 cM increments starting at 6 cMs and going up 200 cMs. The chart may be downloaded as an Excel file from this link. This chart applies to non-endogamous populations. When using the chart to predict relationship from Family Finder data you will need to remove the data for all segments under 7 cMs.

Tim Janzen has also provided data on the number of SNPs shared for different relationships based on the 23andMe Compare Genes function:

Other sources for relationship ranges

Leah Larkin has written a blog post on The limits of predicting relationships using DNA which includes a table of relationship ranges from the DNA Detectives group and a chart showing ranges based on simulations by AncestryDNA.

The DNA Adoption team have provided a DNA Prediction Chart and a Relationship Estimator spreadsheet based on community-provided data for known relationships. For details see the guest blog post by Karin Corbeil on the DNAeXplained blog on Demystifying Ancestry's relationship predictions inspires new relationship estimator tool.

An unidentified author has also provided a spreadsheet on DNA Inheritance Statistics to which anyone can add their data. The spreadsheet can be found here.

The geneticist Graham Coop has published a number of useful articles based on simulations on the subject of autosomal DNA inheritance:

Amy Williams and colleagues at Cornell University have provided some useful charts based on simulations which shows the likelihood of matching with cousins of different degrees of relationship and the number of segments shared:

The following studies have been published online by mathematician and genetic genealogist Paul Rakow: