Full Genomes Corporation was founded in 2013 to make next generation sequencing technology available for the DTC (direct to consumer) market focusing on the Y chromosome. The founders are well known citizen scientists and active in the genetic genealogy community. The headquarters are in Rockville, Maryland, in the USA.

FGC for $50 provides an analysis of third party BAM files and provides the same interpretation results (SNP, STR) as mentioned above. For details see: 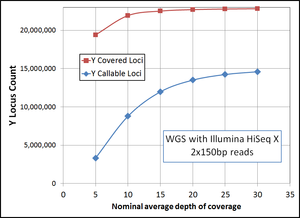 up to 6x: Low-coverage

Introduced in July 2015. No beta results yet available.

Exome sequencing was introduced at the end of September 2015. Two tests are available:

Introduced in spring 2016. Expected primary customers are academic centers who target body regions and cell genome variance for studies. [10] Sequencing of old DNA samples or decayed samples might also be use cases (picograms possible, ie 1 cell of DNA is enough).

This information is not yet available on the homepage and was given by Justin Loe in the Facebook page in December 2013.