FamilyTreeDNA is a division of Gene by Gene, a commercial genetic testing company based in Houston, Texas. FamilyTreeDNA (FTDNA) offers analysis of autosomal DNA, Y-DNA, and mitochondrial DNA to individuals for genealogical purposes.

It was announced on 7 January 2021 that Gene by Gene and all its subsidiaries were merged into the Australian genomics company myDNA,[2] not to be confused with the former BritainsDNA and its associated "MyDNA Global" companies. Dr. Lior Rauchberger, CEO of myDNA, will assume that role for the combined entities. Gene by Gene co-founders Bennett Greenspan and Max Blankfeld will move to advisory capacities and join the Board of Directors. Additional information from Gene by Gene and FamilyTreeDNA regarding the affects on operations is pending as of 11 January 2021.

FamilyTreeDNA was founded based on an idea conceived by Bennett Greenspan, a lifelong entrepreneur and genealogy enthusiast.[3] In 1999, Greenspan had entered semi-retirement and was working on his family history. He began work on his mother's Nitz lineage. When faced with a roadblock in his work, he remembered two cases of genetics being used to prove ancestry that had recently been covered by the media. These were a study by University of Arizona researchers showing that many Cohen men from both Ashkenazic and Sephardic groups share the same Y-Chromosome[4] and a study that showed that male descendants of US President Thomas Jefferson and male descendants of his freed slave Sally Hemings shared the same Y-chromosome and a recent common ancestry.[5] Greenspan had Nitz cousins in California and had discovered someone in Argentina with the same ancestral surname and the same ancestral location in Eastern Europe. Wishing to use the same method of DNA comparison for his own genealogy, he contacted Dr. Michael Hammer at the University of Arizona. Greenspan discovered that academic labs did not offer testing directly to the public and that in general direct to consumer testing for genealogy was not commercially available either. Their conversation inspired him to start a company dedicated to using genetics to solve genealogy problems.[6][7] It was early 2000 when Greenspan, with his business partners Max Blankfeld and Jim Warren, officially launched FamilyTreeDNA. Initially, the Arizona Research Labs at the University of Arizona performed all testing for FamilyTreeDNA.

FamilyTreeDNA includes among its scientific staff, Dr. Michael Hammer (PhD), one of a team of scientists that first published on the Cohen Modal Haplotype in 1997 in the journal Nature. FamilyTreeDNA began with a proof of concept group of twenty-four that returned results in January. They began by offering 12-marker Y-chromosome STR tests, much like those used in many scientific publications of the time, in March 2000.

FamilyTreeDNA became widely known for its Y-chromosome STR testing for the Cohen Modal Haplotype. Soon, they were offering not only DNA tests but an interface by which dedicated genealogists could run surname research studies. The first person to create such a project through the FamilyTreeDNA site was Doug Mumma. It was the Mumma project. A list of the early pioneer projects at FTDNA can be found in the genetic genealogy timeline.

The first tests offered by FamilyTreeDNA were Y-chromosome STR and mitochondrial DNA (mtDNA) tests like those used by published academic studies at the time. FamilyTreeDNA's initial Y-chromosome tests were described as 11 marker tests. They eventually began to call this a 12-marker test as one of the STRs (DYS385) almost always had two copies. This they billed as a method to affirm or disprove a genealogical connection on the direct paternal line. Gradually over the years upgrades where made available with Y-STR 111 introduced in 2011 and the first Big Y sequence test introduced in 2013. [8]

FamilyTreeDNA's first mtDNA tests were for HVR1 (hypervariable region 1) of the mtDNA. Eventually, they added a Plus test that tested for both HVR1 and HVR2, and a full mitochondrial sequence test later became available.

In the early days, they did not confirm haplogroups for either mtDNA or Y-DNA. Later Y-SNP testing trough single SNP testing or Y-SNP-Panels became available. The Import of Y-SNP results from SNP-Chip results from Genographic Project was possible.

In 2006, FamilyTreeDNA bought out the assets of DNA-Fingerprint, which was a German paternity testing company that offered al la carte testing to the genetic genealogy testing community. With this buyout, Thomas and Astrid Krahn who had owned DNA-Fingerprint moved to Houston, TX and helped open the Genomics Research Center. The Genomics Research Center initially did testing for many of the same products that had been sold by DNA-Fingerprint. They began to offer individual and panels of Y-chromosome SNP tests using Sanger testing methods. They also offered the mtDNA full genome test and upgrades to it using the Sanger testing method. Soon came the launch of the Walk Through the Y test. The WTY test offered the most adventurous of citizen scientists the chance to seek the discovery of new Y-chromosome SNPs. Meanwhile, most testing continued to be done at the University of Arizona lab. The demand for additional test types led Greenspan and Blankfeld to move all testing to their own testing lab in Houston, Texas under the Genealogy by Genetics, Ltd. parent company. In February 2009, FamilyTreeDNA announced that they, in partnership with the National Geographic Genographic Project, had tested over 500,000 kits.[9]

In September 2012, Greenspan and Blankfeld restructured FamilyTreeDNA's parent company, Genealogy by Genetics, Ltd. This included their renaming Genealogy by Genetics, Ltd. as Gene by Gene, Ltd. After restructuring, the business comprises four divisions, one of these being FamilyTreeDNA for genealogical DNA tests. It is Gene by Gene, Ltd. that now operates the Genomics Research Center (GRC) lab in Houston, Texas. 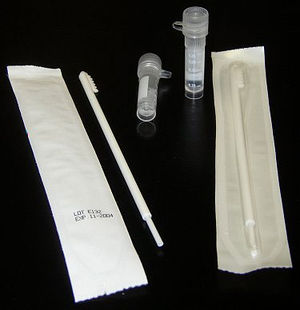 FTDNA offers Y-STR testing of the Y-chromosome to explore ancestry on the patriline. Surnames are usually passed on from father to son so the inheritance of the Y-chromosome often corresponds to the transmission of surnames. Y-DNA is therefore used in surname projects. A haplogroup is determined and backed by FamilyTreeDNA's SNP Assurance Program. The company also offers a comprehensive Y-SNP test known as the Big Y which was introduced in November 2013 (see Y-sequence). Custom single Y-SNPs are available to order a la carte, see Y-DNA project help.

FamilyTreeDNA offers the analysis of mitochondrial DNA, which is found in both men and women. mtDNA traces the matriline (all-female line. FTDNA sells a full mitochondrial sequence test which sequences all 16,569 bases in the mitochondrial genome. Lower resolution tests covering the hypervariable region (HVR1 and HVRA=HVR2) were previously available. Matches are provided with other customers in the FTDNA database and the results can provide information on the geographical origin of the matriline.

In February 2010 FTDNA began the phased launch of an autosomal DNA test known as the Family Finder. The test looks at around 700,000 single-nucleotide polymorphisms (SNPs) across the 22 autosomal chromosomes. Close relations have large shared segments of DNA. More distant relations have smaller segments of shared DNA. The test works best at finding relations up to the fourth or fifth cousin level.

FTDNA host a genetic genealogy conference each year for their project administrators.

When the National Geographic Society launched the Genographic Project in 2005, they selected FamilyTreeDNA as the testing company for all public participation. Genographic Project customers were able to transfer their results to the FTDNA database and benefit from the many surname, geographical and haplogroup projects. Genographic kits in the FTDNA database have the prefix N before the kit number. The public participation phase ended in June 2020.[10]

FamilyTreeDNA staff were instrumental in developing the Geno 2.0 product for the second phase of the Genographic Project.[11] Geno 2.0 samples for both public and scientific study were run at the Genomics Research Center in Houston, Texas, that is operated by FamilyTreeDNA's parent company, Gene by Gene, Ltd.

FTDNA in the news