AncestryDNA is the genetic genealogy database service of myfamily.com (the owner of Ancestry.com). AncestryDNA offers an autosomal DNA test. The test was first launched in the US in 2012. It became available in the United Kingdom, Ireland, Australia, New Zealand and Canada in 2015. It was launched in a further 29 countries in February 2016.

The AncestryDNA autosomal DNA test was launched in the UK and Ireland in January 2015.

In January 2015 Ancestry announced that non-subscribers in the US would be required to pay an annual subscription of $49 in order to access the family trees of their matches. For details see the blog post by Annette Kapple AncestryDNA non subscription accounts downgraded plus people behind the segments.

The AncestryDNA test was launched in Australia and New Zealand at the end of May,[2] and in Canada in June.[3]

The AncestryDNA test was launched in a further 29 countries in February 2016.[4]

The AncestryDNA test was launched in Germany in November 2018.[5]

See the AncestryDNA Support Centre article AncestryDNA availability by country for a list of the countries where the test is sold.

From mid May 2016 onwards AncestryDNA began using a new chip for their autosomal DNA product:

Rebekah Canada has produced some heats maps showing the distribution of SNPs on the two Ancestry chips:

For a comparison of the v1 and v2 chips see the blog post by Roberta Estes on Ancestry V1 vs V2 test comparison (5 October 2016).

The Ancestry autosomal test has a unique feature whereby possible common ancestors are identified by Shared Ancestor Hints as can be seen from the screenshot below. Results can also be filtered for those who have a "hint". A number of ISOGG members in the US have reported receiving a large number of meaningful matches thanks to this feature. See also the blog post from Ancestry.com AncestryDNA discoveries made easier with the help of the shaky leaf. 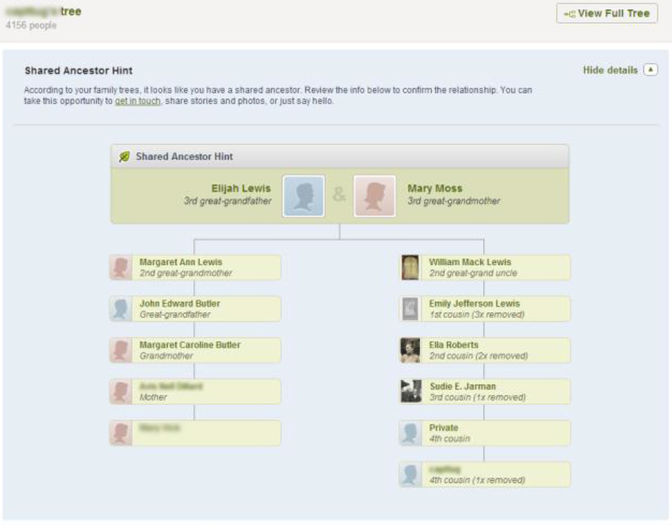 The Genetic Communities feature was introduced in March 2017. It has now been integrated into the ethnicity report. The communities are now labelled as regions. If the region does not fall within an "ethnicity" it is labelled as a migration.

You can download your raw data from your AncestryDNA and upload it to a number of other company websites in order to get a different range of matches, reports and tools. At all all the companies the matches are provided free of charge but there is a small fee to access the additional features.

AncestryDNA raw DNA results can also be used with a wide range of third-party tools. See the Wiki article on autosomal DNA tools.

The chip used by AncestryDNA includes a small selection of Y-chromosome SNPs. Ancestry does not provide a Y-DNA haplogroup report but it is possible to get a haplogroup assignment from the raw data. See the blog post by Steven Frank Updated method to get YDNA haplogroup from AncestryDNA results for details of how to do this.

Y-DNA tests can be purchased from Ancestry which reported results for 33 markers or 46 markers. Note, however, that these tests included three markers that are very rare in the normal population, so most males ordering those tests will not receive results for the full number of markers claimed. Other testing companies will report values for these markers where found but will not include them in the total count. Note also that Ancestry do not currently have any facility to test single-nucleotide polymorphisms (SNPs) to confirm haplogroup predictions.

Y-chromosome DNA test results obtained from companies other than AncestryDNA can be manually entered into AncestryDNA's database (although currently, some marker results may require conversion to the AncestryDNA format), and thus can be used to find matches within this database. For access to the database, a free Ancestry.com "Registered Guest" account suffices.[9] Paid accounts, at either Ancestry.com or myfamily.com, are not required. (Some web links at AncestryDNA will, under certain conditions, send the browser to a myfamily.com site, suggesting that an account be purchased there.) A separate Ancestry.com account is required for each DNA result you wish to add to their database.

The way in which testing companies report the values for the various markers is not yet consistent though eventually all companies will conform to the NIST (US National Institute of Standards and Technology) standards. Ancestry's markers now conform to the NIST standards but Family Tree DNA, with their much larger database, have not yet completed the upgrade. In the meantime to compare results between the two different testing companies it is necessary to convert some of the marker values. A useful guide to the conversion process is provided here.

AncestryDNA results can be uploaded free of charge to Y-search, a public Y-DNA database sponsored by Family Tree DNA. Results can also be compared with those on other public DNA databases such as the Sorenson Molecular Genealogy Foundation's database and the Y Chromosome Haplotype Reference Database.

In August 2011 Family Tree DNA announced that it would accept third-party transfers from people who had taken a Y-DNA test with companies that used the Sorenson Genomics Laboratories. Ancestry customers are therefore now eligible to transfer their results to the larger FTDNA database and join the various surname, haplogroup and geographical projects. It is however necessary to pay a small fee for the transfer to preserve the integrity of the database. Further information on the process can be found in the Third-party transfers FAQs. Y-DNA results from third-party Sorenson transfers are prefixed in the FTDNA database with the letter B.

Reviews of the Ancestry Y-DNA test

Ancestry offers a single mtDNA test which sequences hypervariable regions 1 and 2 (HVR2 bases 1-390 and HVR1 bases 16000-16569). Note that the testing companies do not use the same nomenclature to describe the hypervariable regions. At Family Tree DNA HVR2 includes bases 1-574. Companies that use the Sorenson Genomics Labs split HVR2 into two sections HVR2 (bases 1-390) and HVR3 (bases 391-574). Note that Ancestry does not provide any SNP testing to confirm the mtDNA haplogroup assignments. Haplogroup assignments can be checked by using James Lick's mtHap utility which can be found at http://dna.jameslick.com/mthap. In many cases it will not be possible to provide a definitive haplogroup designation without additional testing.

For information on Ancestry's mtDNA matching system see the blog post by Roberta Estes entitled The trouble with Ancestry.com matches.

Ancestry.com has toll-free/freephone telephone contact numbers in six countries: United States, UK, Australia, New Zealand, Canada and Sweden. A list of numbers can be found here. They provide a telephone service for DNA enquiries in five countries: United States, UK, Australia, New Zealand, Canada. The contact numbers are the same as the Ancestry.com numbers but outside North America the operating hours are much shorter. Details can be found here. ISOGG members in the UK have reported that if they ring the UK Ancestry telephone number with a DNA query they are transferred free of charge to the US site if the UK representative is not able to answer the question. The call must be made within the appropriate hours.