A mitochondrial DNA test (mtDNA test) traces a person's matrilineal or mother-line ancestry using the DNA in his or her mitochondria. mtDNA is passed down by the mother unchanged, to all her children, both male and female. A mitochondrial DNA test, can therefore be taken by both men and women. If a perfect match is found to another person's mtDNA test results, one may find a common ancestor in the other relative's (matrilineal) "information table". 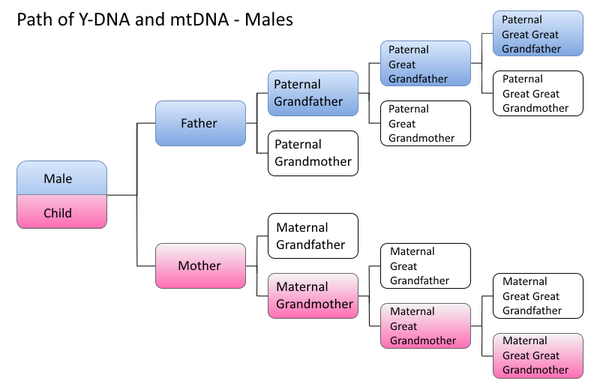 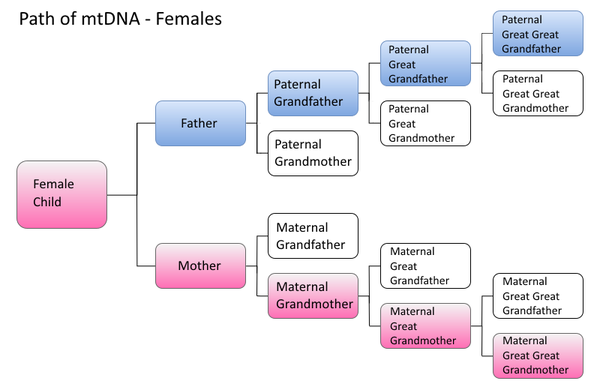 See also the animation on mitochondrial DNA on the Learn Genetics website which provides a good explanation of the inheritance of mtDNA.

mtDNA by current conventions is divided into three regions. They are the coding region (00577-16023) and two hyper-variable regions (HVR1 [16024-16569], and HVR2 [00001-00576]). All test results are compared to the mtDNA of a European in haplogroup H2a2a. This early sample is known as the Cambridge Reference Sequence (CRS). An updated reference sequence was subsequently published and samples are now compared to the revised Cambridge Reference Sequence (rCRS). A list of single-nucleotide polymorphisms (SNPs) is returned. The relatively few "mutations" or "transitions" that are found are then reported simply as differences from the CRS, such as in the examples just below.

Many people are now choosing to have the full mitochondrial genome sequenced (scientifically called the mtDNA genome or mitogenome). This is at times called the mtDNAFullSequence, the Mega Test, or the full mitochondrial sequence (FMS) test. An FMS test will report results for all 16,569 bases in the mtGenome and will provide the most detailed subclade assignment. If two people have an exact FMS match they will generally share a common ancestor within the last 22 generations (about 550 years).[3] Conversely it is sometimes possible for mothers and daughters or siblings to have differences in their mtDNA. These differences usually take the form of a heteroplasmy.

Family Tree DNA and GeneBase are the only two companies that currently offer the FMS test. A full sequence test was previously available from the now defunct company Argus Biosciences.

Some companies and organisations, such as the Genographic Project, 23andMe and Living DNA, use microarray chips which provide a scan of selected SNPs from across the entire mtDNA genome. The SNPs are chosen for the phylogenetic relevance and can provide a fairly detailed haplogroup assignment. However the results from these tests are not compatible with the genealogical matching databases.

Family Tree DNA customers who have ordered a full mitochondrial sequence test from FTDNA can order a custom mtDNA report from ISOGG member Dr Ann Turner to help them understand their results. 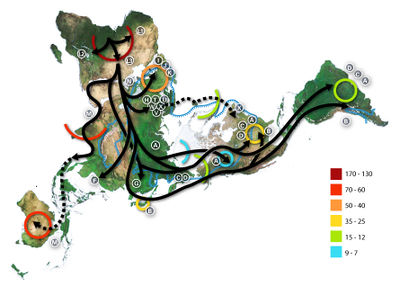 Map of human migration out of Africa, according to mitochondrial DNA. The numbers represent thousands of years before present time. The blue line represents the area covered in ice or tundra during the last great ice age. The North Pole is at the centre. Africa, the centre of the start of the migration, is at the top left and South America is at the far right.

Phylotree provides a public copy of the mtDNA tree based on samples uploaded to the public GenBank database.

Family Tree DNA provides a public mtDNA haplotree that follows the Phylotree nomenclature and draws from over 170,000 mitochondrial full sequences tested at FTDNA.

Phylotree is now on Build 17. Updates are released every couple of years. Genetic genealogists who have taken mtDNA tests with different companies will sometimes find that they receive different haplogroup assignments. This is because the companies are using different versions of the mtDNA tree. Family Tree DNA updated to Build 17 towards the end of March 2017. 23andMe upgraded their haplogroup reports in June 2017.

A large and detailed mtDNA phylogeny can be seen on the Mitomap website.

An up-to-date haplogroup assignment can be obtained from James Lick's mtHap utility. This tool is usually updated within 24 hours of the release of each new Phylotree build.

Haplofind is an alternative and less sophisticated tool more suited for batch processing mtDNA full sequence results. It does provide a list of mutations with reported and associated medical implications.

A video of a presentation by ISOGG member Maurice Gleeson showing how mitochondrial DNA testing can be used in family history research:

Bill Hurst, the administrator of the mtDNA haplogroup K, project, describes how he successfully used mtDNA testing to unravel the tale of two sisters:

This article is licensed under the GNU Free Documentation Licence. It incorporates material from the Wikipedia article "Genealogical DNA test".